Canines generally earn “senior” status when they’re between 7 and 10 years old, depending on their specific breed. Common indications of old age in dogs include changes in weight, vision loss, graying muzzles and increased irritability.

Deterioration of the senses and related organs is a common part of aging for dogs, just as it is in human beings. Some examples include:

Dogs, like humans, often grow gray hairs as they age, particularly around their eyes and on their muzzles. Their coats may thin out, and their nails often change, becoming significantly weaker and more prone to breakage with the passing years. Their footpads tend to thicken noticeably. Skin changes are common in aging dogs, too. It isn’t uncommon to see benign tumors and fatty deposits on an aging dog’s body. Older dogs tend to develop drier, thinner and more delicate skin, as well.

Many older dogs experience weight gain that’s apparent simply by looking at them. This is due to the shifts in metabolism that occur as dogs get older. As dogs age, their caloric requirements lessen. The same goes for their physical activity levels. As a result, feeding aging pets the exact same portions as in their younger years can lead to weight gain. Obesity is a major medical issue in elderly canines. 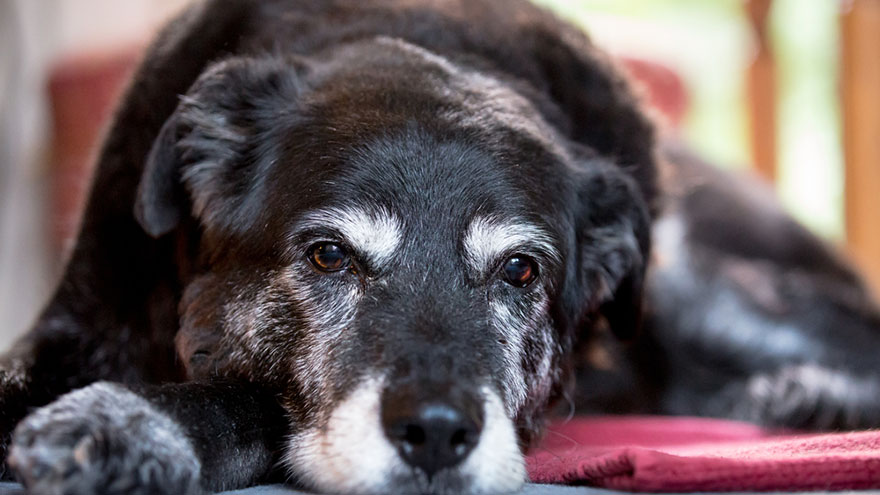 Cognitive dysfunction syndrome is a common in aging in dogs. This condition involves the brain aging. According to FamilyEducation.com, more than 50 percent of canines who are at least 10 years old develop some symptoms of this syndrome.

Other oft-seen signs of the aging process in dogs include but are not limited to:

Tip
Many medical problems are particularly prevalent in older dogs. These include liver, kidney and heart disease, diabetes, breast cancer and testicular cancer. Take your pet for routine veterinary checkups to make sure that you don’t confuse normal signs of aging with symptoms of potentially serious illnesses.

Seek prompt veterinary attention for your pet if you observe symptoms such as: