What Is Canine Nuclear Sclerosis?

If your aging dog’s eyes develop a blue haze, he’s likely developed canine nuclear sclerosis. Also known as lenticular sclerosis, it’s a normal condition in older eyes, canine or human. However, a blue sheen over the lenses could mean your dog is suffering from cataracts, which require veterinary treatment to stave off loss of vision. Take your pet to the vet if you notice any changes in his eyes.

The lens of the eye works by bending light rays, producing a retinal image. New fibers in the lens form constantly, pushing older fibers toward the center of the lens. As time passes, this process doesn’t work as efficiently. Your dog’s lens becomes clouded and hardened by fiber compression — or nuclear sclerosis. While your dog might lose some vision over time, it’s not sufficient to cause issues in most old canines. 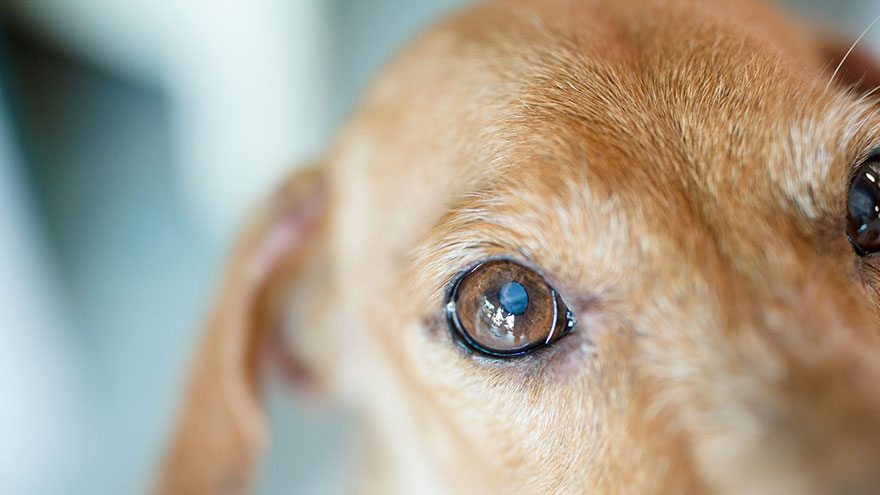 Nuclear sclerosis begins in middle-age dogs generally by the age of 8. It takes a while to progress to the point where the blue haze is really noticeable, so an owner might not realize a dog has nuclear sclerosis until the animal is fairly old. Besides the blue haze, your pet’s formerly black pupils may look gray or white. The latter is also a common sign of cataracts.

Your vet can dilate your dog’s pupils with eye drops to determine whether the condition is nuclear sclerosis or a cataract. She’ll also observe your dog’s movements in the office for any sign of visual impairment, such as running into objects. If she suspects a cataract, she may refer you to a veterinary ophthalmologist for further diagnostics. If a young dog develops a cloudy eye, it’s almost certainly a cataract, as certain breeds inherit this eye disorder. Diabetic dogs are also prone to cataracts.

If your vet’s diagnosis is nuclear sclerosis, there’s nothing further you have to do. It’s not a condition requiring treatment, and it doesn’t hurt; but you should keep a close watch on your dog’s eyes and take him to the vet for an semiannual examination. During this recommended wellness visit for aged pets, your vet will examine your dog’s eyes for incipient cataract development. While not all dogs with nuclear sclerosis go on to develop cataracts, many do. Surgically removing a cataract in its early stages can spare your dog from vision loss.