Itchiness, redness and other symptoms are common in dogs with skin problems. When you notice such signs of a skin condition, take him to the vet. Trying to identify a skin problem at home can be futile, because many skin conditions have similar symptoms. Only a vet can provide a legitimate diagnosis and advise proper treatment.

Common signs that something’s wrong with your dog’s skin include redness or red spots and patches, flaky skin, intense scratching or licking that can lead to hair loss, scabs or thick yellowish skin, and odor. Intense scratching can sometimes break the skin, leading to secondary infections and bleeding.

Mange is a skin disease caused by mites. Demodectic mange is characterized by severe hair loss that starts around the eyes or on the face and sometimes extends to the rest of the body. Skin redness and secondary infections are common in dogs with mange, as scratching makes the skin more susceptible to injury. Sarcoptic mange is a more serious type of mange that is highly contagious and can transmit to humans. It causes scabbing, lesions and intense itching. 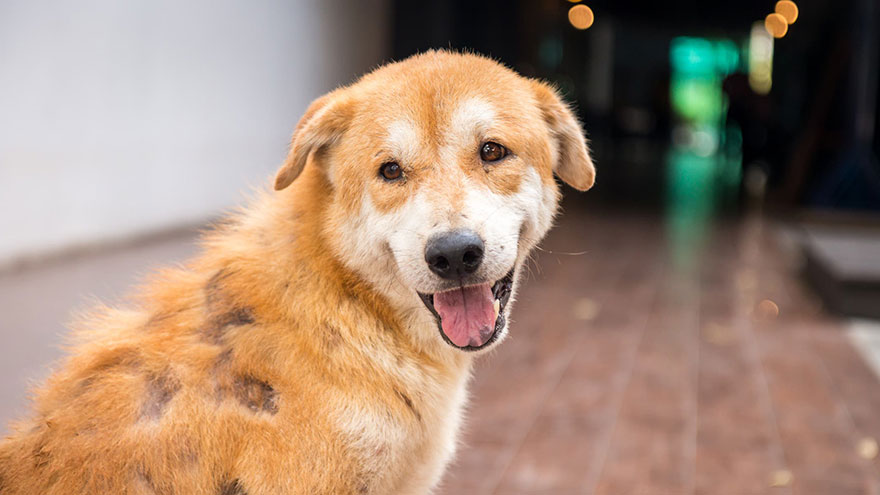 Despite its name, ringworm is actually a fungus. It is more common in puppies, but it can also appear in dogs with suppressed immune systems or those under severe stress. Common symptoms of ringworm include bald circular spots on the head, ears and other areas of the body. Although the spots may not be particularly itchy, they can become inflamed and develop scabs if a dog licks or scratches constantly. Ringworm is highly contagious and also zoonotic — it can transmit to other species, including humans.

Some diagnostic tests are more invasive than others. Some issues are obvious to the eye. For example, a vet might simply comb a dog with a flea comb to check for evidence of fleas. If he finds them, he has several options for immediate relief and for treatment. In many cases, the vet can get an idea of what the problem is just by observing your dog, and then order tests to confirm his suspicion. For mange mites, diagnostic skin scrapings are typical; a fungal culture is often the right test to check for ringworm.

Diseases of the Brain in Dogs

What Is Canine Nuclear Sclerosis?