Sarcoptic mange is a highly contagious skin disorder that causes extreme skin irritation, itchiness and hair loss in dogs. The disease is caused by microscopic mites, called Sarcoptes scabiei var. canis, that depend on dogs for sustenance and the completion of their life cycles. Although the disease is most common among dogs living in poor conditions, even well-kept dogs can contract the mites from brief exposure to infected animals, bedding or kennels.

Common symptoms associated with sarcoptic mange include intense itchiness, hair loss and the development of crusty scabs. Some areas – such as the legs and underbelly of your dog – are more likely to develop hair loss than others are, as the mites prefer areas that have relatively little hair.

A dog’s persistent scratching and biting often cause development of sores, lesions and secondary bacterial infections. In cases of serious infection, a dog’s lymph nodes may become swollen.

Scabies mites spend most of their lives burrowed underneath the skin of a host animal. The females deposit eggs inside their burrows; the eggs hatch into six-legged larvae about one week later and soon develop into eight-legged nymphs.

The nymphs then molt a final time and become adult mites. At this time, the adults emerge from their burrows and begin seeking out mates. The entire life cycle takes about two to three weeks to complete. 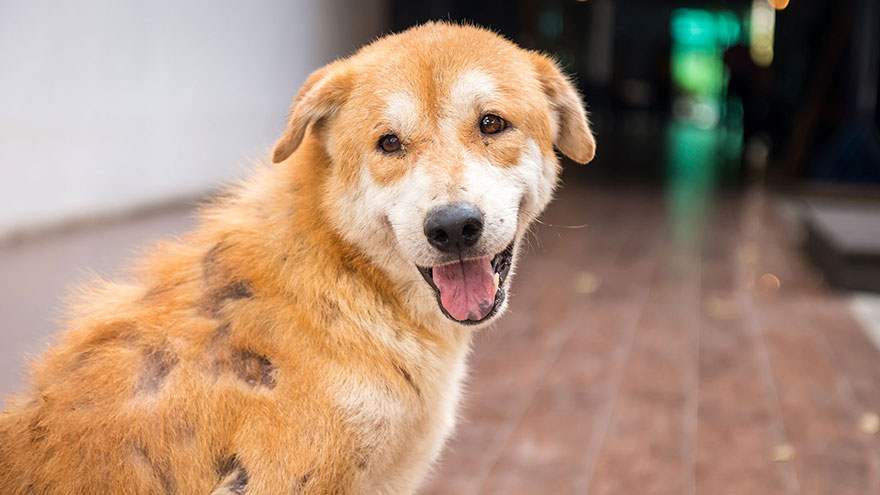 Mites spend most of their lives on their hosts, but those that disperse into the environment can infect other dogs. Direct, dog-to-dog contact is not necessary for the transmission of the parasite, as adult sarcoptic mites can live in the environment for up to 22 days in ideal conditions.

When a suitable host is near, mites hop on and the females begin laying eggs in the new host’s skin. Occasionally, scabies mites can colonize humans. While such infestations are self-limiting in humans – they cannot complete their life cycle away from their preferred hosts – the condition can be distressing. Humans will accelerate the healing process with mild medical treatment.

Your veterinarian can prescribe a variety of medications to eradicate scabies mites living on your dog. Depending on your pet’s health and the level of infestation present, your veterinarian may prescribe one or more anti-parasitic medications to treat the problem. A variety of medications are available for treating the condition, and they come in a variety of forms, including medicated dips, baths, oral tablets, oral liquids or injections to treat the problem.

If secondary infections are present, your veterinarian may also prescribe antibacterial medications. In addition to keeping your dog isolated during this time, you should disinfect or discard your dog’s bedding, which may be harboring additional mites.