Anyone who’s seen Disney’s classic “Old Yeller” knows and fears the word “rabies.” This disease is caused by a virus that attacks the animal’s central nervous system in a number of irrevocable ways. Rabies progresses in one of two ways, and in one becomes hydrophobia, or fear of water. It always causes some obvious symptoms, and can be fatal if left untreated.

Rabies can infect any warm-blooded animal. This virus is transferred through saliva, and can only be passed on by one animal biting another. Dogs and cats who are outside and at risk of bites from raccoons, squirrels, skunks and possums should be vaccinated against rabies. 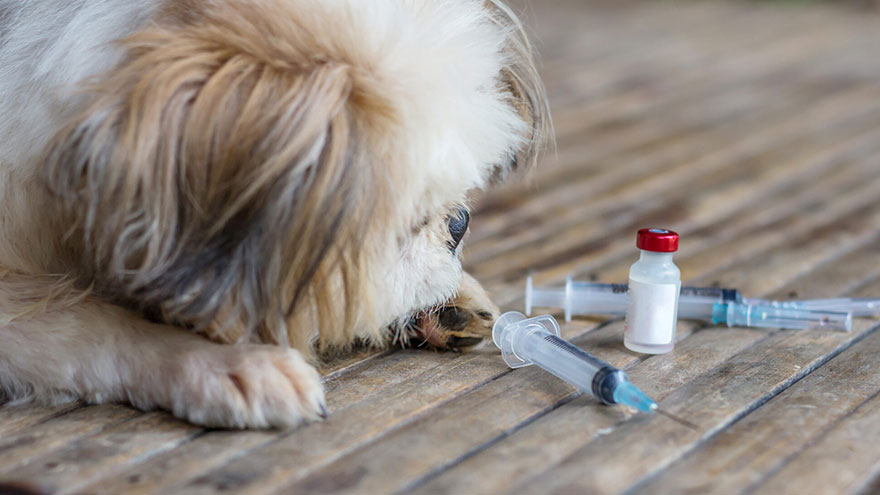 Once it enters an animal’s bloodstream, the rabies virus attacks the central nervous system and makes its way toward the animal’s brain. Once it’s in the brain, the virus causes encephylitis, or inflammation, according to 2ndChance.info. This inflammation is what brings on the symptoms.

Symptoms of rabies include fever and lethargy at the start, then neurological symptoms like confusion, wandering and agitation. If the rabies progresses to paralyzed rabies, the animal becomes withdrawn, upset, overly affectionate and paralyzed, eventually succumbing to an inability to breathe or swallow. If the rabies progresses to furious rabies, the animal experiences blindness, inability to swallow, seizures and violence, and eventually succumbs to the same inability to breathe or swallow.

According to the Canadian Centre for Occupational Health and Safety, victims have an “uncontrollable fear of water” toward the end of the disease’s progression. This symptom only occurs in furious rabies. The hydrophobia is accompanied by strange, violent behavior like raging and a tendency to bite. These symptoms occur shortly before death from the disease.

Animals who are showing symptoms of rabies are infected to the point of fatality. The symptoms mean that their brain is swelling, and that they are beyond saving. At that point the kindest action is to humanely euthanize the animal to alleviate its suffering.

Rabies is preventable through a rabies vaccine. This inoculation contains “spent” virus bodies, which lead an animal’s body to develop antibodies and effectively become immune to rabies. Vaccines are refreshed once a year, and are also used to treat animals that have been bitten and contracted the rabies virus, but have not yet shown any symptoms.

Medications for Dogs With Respiratory Problems