Lymphoma is a common form of cancer in dogs, which can be treated but is ultimately fatal. It is not just one form of cancer, but it is comprised of many different types, including mediastinal lymphoma. Mediastinal lymphoma attacks the lymph nodes and thymus within the chest, known as the cardiothoracic region. The somewhat rare cancer is sometimes also called thymic lymphoma.

Mediastinal lymphoma is characterized by swelling of the lymph nodes and thymus. A dog who has this kind of cancer may have swelling in the face and neck as well as forelegs. Because fluid collects around the lungs, your dog may have difficulty breathing. He may drink more water than usual and urinate far more than healthy dogs.

Other common symptoms might include weight loss, lethargy and loss of appetite. Without treatment, mediastinal lymphoma can put such pressure on your dog’s lungs that he can no longer breathe and will die from lack of oxygen. 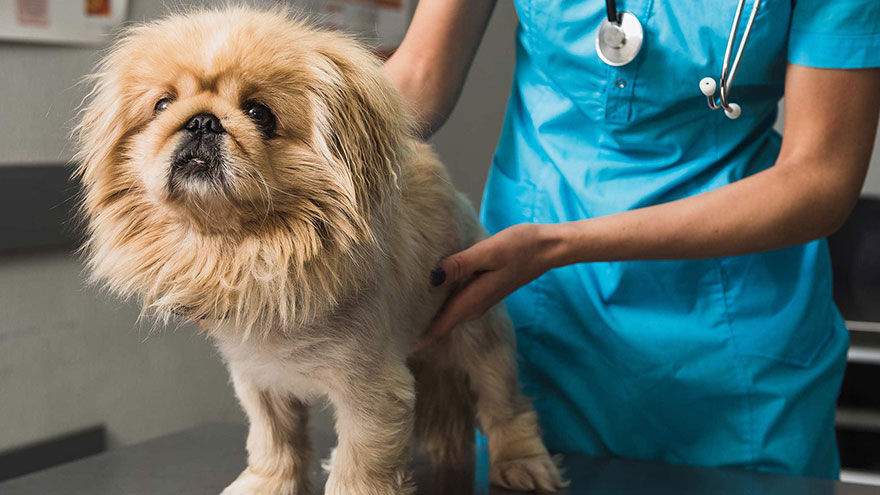 If your dog exhibits any of these symptoms, or if you feel a hard lump, bring your dog to your veterinarian for a diagnosis. Veterinarians diagnose lymphoma by performing a biopsy on the suspected tissue.Your veterinarian may recommend a staging test to determine how far the cancer has progressed, to have a better idea how to treat the cancer and what the prognosis is.

If your dog has lymphoma, especially mediastinal lymphoma, you may be wondering what caused it. Veterinarians do not know the cause of mediastinal lymphoma. Many different causes have been suggested, from exposure to pesticides, to magnetic fields generated by electric lines, to viruses and bacteria, but studies are inconclusive.

Airedale terriers, basset hounds, boxers, bulldogs, bull mastiffs, Saint Bernards and Scottish terriers may be more at risk than other breeds, but any breed or mixed breed can contract lymphoma. Lymphoma makes up 10 to 20 percent of all cancers.

The prognosis for mediastinal lymphoma depends on the cancer’s stage. If it hasn’t metastasized to other organs or places within the body, the prognosis is better when it has progressed to a later stage. Even so, lymphomas respond well to chemotherapy. Dogs seldom have the same negative reactions to chemotherapy as humans do.

If caught early, your dog’s cancer can go into remission. Eventually, mediastinal lymphoma will return and your dog will have to undergo a second round of chemotherapy. Remission time for lymphoma is somewhere between 9 and 14 months. Only 1 in 5 dogs live to their second year. This may seem like dismal odds, but for most dogs it’s a tenth or more of their life span.