What Are the Causes of Gas in Boxer Dogs?

As unpleasant experiences go, sitting close to your flatulent boxer may be at the top of the list. You love your dog, but the smell of gas can become unbearable. Even though most flatulence is harmless, some types of gas indicate disease processes that can be a veterinary emergency, and, without treatment, can be fatal to your dog. 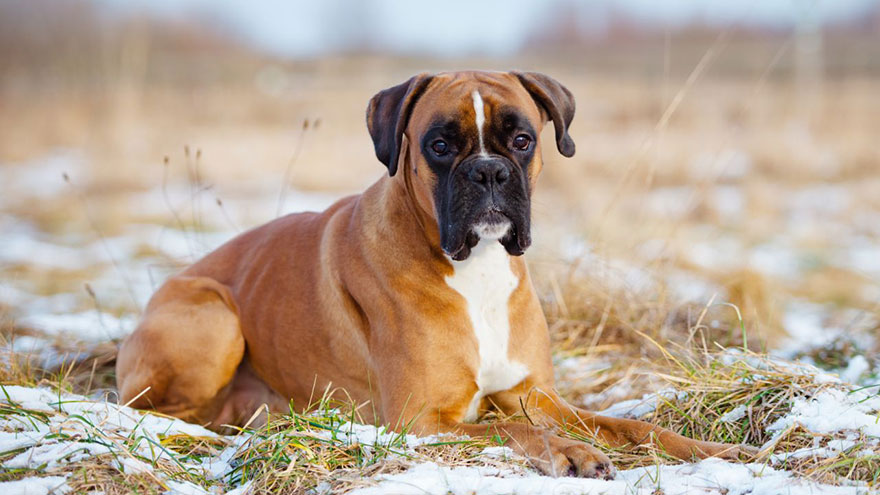 Because of their large, muscular chests and narrow abdomens, your boxer (like many other large-bodied, deep-chested breeds) is prone to a condition called gastric dilatation-volvulus, or GDV. Also called “bloat,” the stomach dilates and fills with air, putting pressure on the other organs in the body, including the diaphragm and the lungs, making it hard for your dog to breathe. You can recognize this condition if your dog’s abdomen becomes round, hard, painful and distended.

The stomach can rotate on itself (volvulus), cutting off its own blood supply, and begin to necrose or die. Your dog’s condition by this point becomes rapidly critical and without immediate veterinary care, he will die very quickly. Not all dogs that have a gas buildup and resultant dilatation develop the more serious and life threatening volvulus. However, almost all dogs that have a volvulus develop it as a result of a dilatation.

Your boxer, like most of the short-headed, flat-nosed brachycephalic breeds, may tend to swallow air. This trait, called aerophagia, forces air through the nose, over the long, soft palate and into the stomach and gastrointestinal tract, causing bouts of flatulence. Snoring also results from aerophagia.

Diets high in fiber, dairy products, or hard-to-digest products such as soybeans, peas and beans will cause gas in your boxer. High-fat diets and spicy foods, plus new foods introduced into his diet, will trigger flatulence. If your boxer eats fast and tends to gulp his food, he will also swallow air that passes into his stomach. Food allergies are known to cause excess gas, as will foods with poor protein quality, including some of those containing beef and potatoes.

Some common gastrointestinal diseases, including those caused by bacteria, parasites and viruses, bring on bouts of flatulence, as well as significant amounts of diarrhea and vomiting. If your boxer develops a disease where he has difficulty absorbing nutrients (such as Cushing’s disease), or pancreatitis, that causes poor digestion, the resultant bacterial fermentation will cause your dog to be gassy.

Some boxers develop inflammatory bowel disease (IBD), an inflammation of the large intestinal wall. IBD causes the dog to not be able to properly digest the proteins in his food, leading to the clinical signs of vomiting, diarrhea, loss of appetite, weight loss and extended flatulence.

Gastrointestinal cancers, including lymphosarcoma and other neoplasias, often bring on flatulence in boxers. As the cancer destroys normal cells of the stomach, intestinal walls and lining, the gases released in decomposition will build up and cause flatulence. In addition, the abnormal condition of these organs allows the escape of cellular chemicals and enzymes from the body in the form of gas.

When your boxer becomes constipated, frequent straining plus the decomposition of old food in his large intestines and bowels allows for the accumulation of extra gas. Extra gas equals flatulence in many dogs.

What Do You Wash an Itchy Dog With?