Symptoms if a Dog Is Allergic to Flea Bites

The allergic response to flea bites, called flea allergy dermatitis, almost inevitably leads to reddened skin and hair loss when a dog tries to relieve itching. It takes just one flea bite to bring about a reaction on susceptible dogs, so preventing fleas from biting is the best treatment. Prevention requires controlling fleas and eggs in the environment as well as on the dog himself. 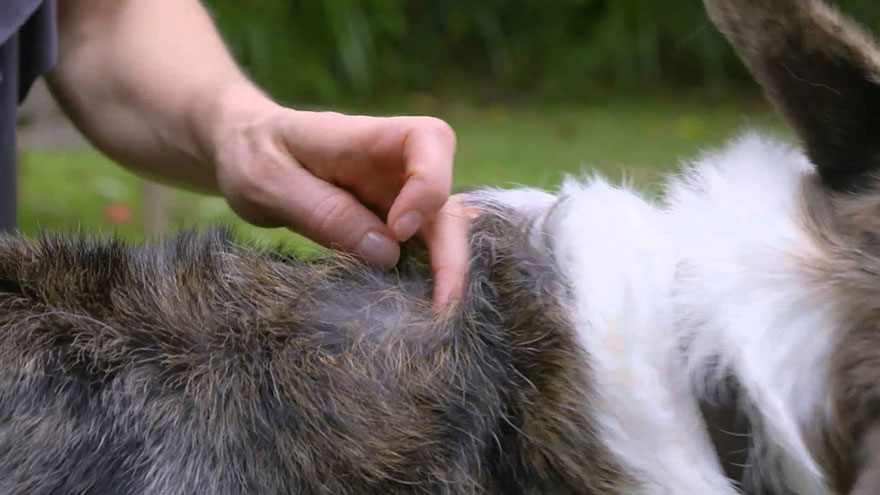 Flea allergy dermatitis is caused by a response that some dogs have to certain proteins that fleas inject into the skin when they bite. It is typically a seasonal allergy that worsens in the warm weather months when fleas are most active. Even in areas with warm weather most of the year, such as the South, flea activity and flea allergy dermatitis are both elevated during the summer and fall.

This allergy is characterized by severe itching, which results in your dog aggressively biting and licking the affected areas. This biting and licking may result in hair loss, particularly on his back and hips and at the base of his tail. Your dog also may get lick granulomas on the front legs and paws. A dog with severe infestation may be covered with specks that appear black but turn red or rust-color when smeared or wet. These specks are flea feces. Severe flea allergy dermatitis may result in inflamed, red skin covered with small pustules if it is left untreated.

A dog with flea allergy dermatitis typically will have scabby, crusted skin. It may appear dark or thickened from continued irritation and repeated scratching. Skin infections can result from the dog’s scratching, licking, chewing and biting at the irritated areas — in response to flea bites. These bacterial or fungal infections may have a foul odor. Rid the dog and his environment of fleas and flea eggs in conjunction with the dog’s treatment for the infection, otherwise the dog will become infested again.

Treating your dog for flea allergy dermatitis involves bathing, use of flea control preparations and treatment of the secondary skin issues and hair loss. Bathing will remove flea dirt and many adult fleas. It also will clean and potentially soothe his skin. Once your dog has dried, treat him with a topical flea treatment. In general, powders and sprays are less effective than monthly topical liquids. Keep in mind that topical liquids vary in effectiveness depending on manufacturer and formulation.

Controlling Fleas in the Dog’s Environment

Only adult fleas live on hosts. They may lay their eggs on a host, but their larvae and pupae live in the animal’s environment, not on the animals themselves. Treating the environment involves cleaning the dog’s sleeping area, removing the fleas from the house and controlling fleas in the yard. If you don’t tackle all three measures, your dog risks infestation every time he enters the untreated area.

Flea eggs can hatch in as little as two weeks in humid conditions. The resulting larvae are attracted to moist environments, organic matter and adult flea dirt, so clean all of your dog’s territory thoroughly. Wash his dog’s bedding often as well. Although pesticides would seem to be an effective means of controlling flea pupae, pupae are protected by cocoons in which they can survive for up to about nine months. This cocoon prevents pesticides from reaching them, making occasional treatment of the environment a vital part of controlling flea allergy dermatitis.