Masticatory muscle myositis is a condition whereby a dog’s own immune system attacks muscles in the jaw. Symptoms begin with swollen or painful jaw muscles. In particularly acute cases, he may be unable to open his jaw. Left untreated, masticatory muscle myositis leads to severe muscle wasting, giving affected dogs a hollow, sunken appearance. Early diagnosis and treatment are critical to a good outcome. 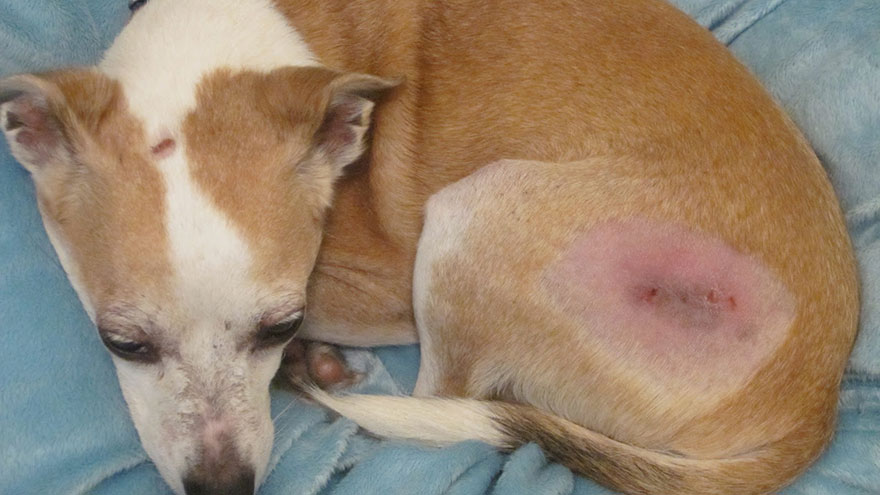 The masticatory, or “chewing” muscles, include the temple, specifically the temporalis muscles, and the jaw muscles, including the masseter, pterygoid and rostral digastricus muscles. Unlike limb muscles, which are made up of 1A and 2A fibers, masticatory muscles are comprised of 2M fibers, muscle fibers found nowhere else in the body.

In masticatory muscle myositis, the dog’s own immune system attacks these unique 2M fibers. Scientists are not clear why some dogs develop the condition, though it does appear more frequently in large-breed dogs, most commonly Doberman pinschers, German shepherds, golden retrievers and Labrador retrievers. Cavalier King Charles spaniels appear to be genetically predisposed to masticatory muscle myositis. Males and females are equally affected, at an average age of 3 years old.

Masticatory muscle myositis can take two forms: acute or chronic. In the acute phase, a dog has swollen, painful jaw muscles and may be unable to open his mouth, a symptom referred to as trismus. In 44 percent of cases, the eyes will bulge outward as a result of swelling in the pterygoid muscles behind the eyes.

As the condition progresses to the chronic phase, the chewing muscles atrophy significantly, giving the dog a hollow look. Often, the dog’s eyes will appear sunken as the pterygoid muscles atrophy. Recognizing symptoms of masticatory muscle myositis in the acute phase is critically important as early detection and treatment most often results in a better outcome.

Initial diagnostic testing includes a complete physical and neurological examination, as well as blood work. Creatine kinase, an enzyme associated with muscle damage, is often elevated in the blood during the acute phase, though this value drops back to normal in the chronic phase. In the past, veterinarians had to rely on painful muscle biopsies to confirm the disease.

In 2004, scientists at the University of California at San Diego’s Comparative Neuromuscular Laboratory developed the 2M antibody test, a blood test that definitively detects the presence of antibodies that attack 2M muscle fibers. The test — priced at just under $100 — is now the preferred diagnostic test for canine masticatory muscle myositis.

The treatment for masticatory muscle myositis — as with other autoimmune diseases — is suppression of the immune system, generally with high doses of corticosteroids such as prednisone or dexamethasone. The medications are often continued for up to six months, possibly longer. If stopped prematurely, the dog may relapse and second treatments are generally less successful. Unfortunately, there are side effects of steroid use. Short term, dogs on high-dose steroids drink and urinate excessively, a challenge for many pet owners. Long-term, chronic steroid use can lead to medication-induced Cushing’s disease.

Prognosis is generally good for dogs who receive adequate treatment during the acute phase. However, many owners miss the symptoms and the disease progresses to a chronic phase. In these cases, muscle atrophy is rarely reversible and persistent jaw dysfunction may result.

Symptoms of Spleen Tumors in Dogs