What Is Retinoblastoma in Dogs?

Retinoblastoma is a cancerous tumor of the retina, which is the part of the eye that senses light. It usually affects children under the age of 6 but can also appear in dogs. 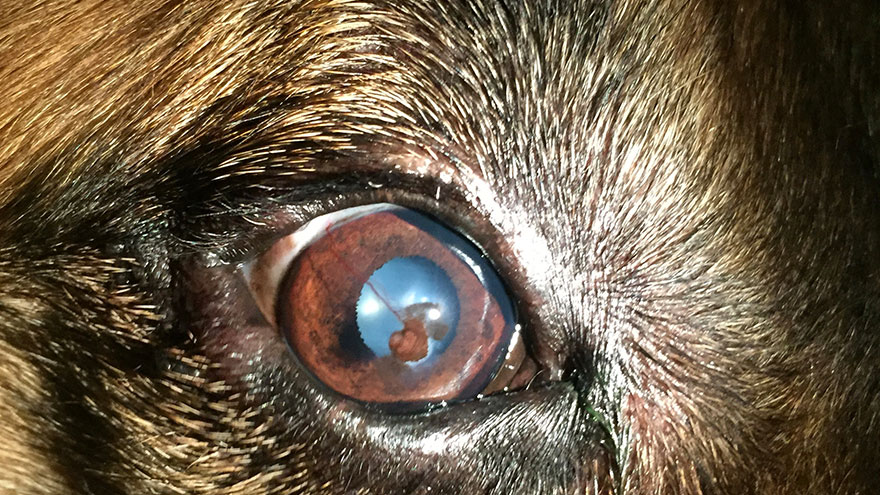 The first documented case of spontaneous retinoblastoma in dogs occurred in 1997, according to the Archives of Ophthalmology. It appeared with very similar symptoms seen in human retinoblastoma.

The symptom that is usually first noticed in dogs is a white glow in the eye in photographs when a flash was used. This is different from typical red-eye or blue reflections seen in healthy dogs’ eyes. Other symptoms include pain, crossed eyes, problems seeing or a change in iris color. A symptom more specific to retinoblastoma that has been documented in humans and dogs is a Flexner-Wintersteiner rosette, which is a cell shaped like a spoke and wheel in the eye.

Retinoblastoma can be genetic, but it is not always. It is caused when a retinal cell mutates, causing cancerous growth to spread throughout the retina of the eye. It can influence one or the two eyes.

Treatment relies upon how far the malignant growth has spread. For humans, laser therapy and radiation are available. In dogs, it is less likely that expensive treatment processes would be used. Removal of the eye—if the cancer has not spread outside of it—is possible.

A pet owner can get information about a dog’s ancestors from the breeder. If there has been a history of this type of cancer, especially if it occurred in both eyes, then a dog has an increased chance of getting the disease.

What Dog Diseases Can Be Passed to Humans?