The Period of Pregnancy in Dogs

The period of pregnancy in dogs is called gestation. During gestation the puppies develop in the mother’s uterus. Average gestation in dogs lasts approximately nine weeks, or 63 days. However, puppies can be born as early as 58 days or as late as 68 days.

If she is carrying a large litter, a dog may gain weight after the fifth week of pregnancy; if pregnant with only a few pups, weight gain may not occur until the final few weeks of pregnancy. As dogs near the end of pregnancy they may become irritable and isolate themselves from the rest of the family. Dogs can experience a nesting instinct; they might try to prepare for the new arrivals by ripping papers or linens in an attempt to make a bed. 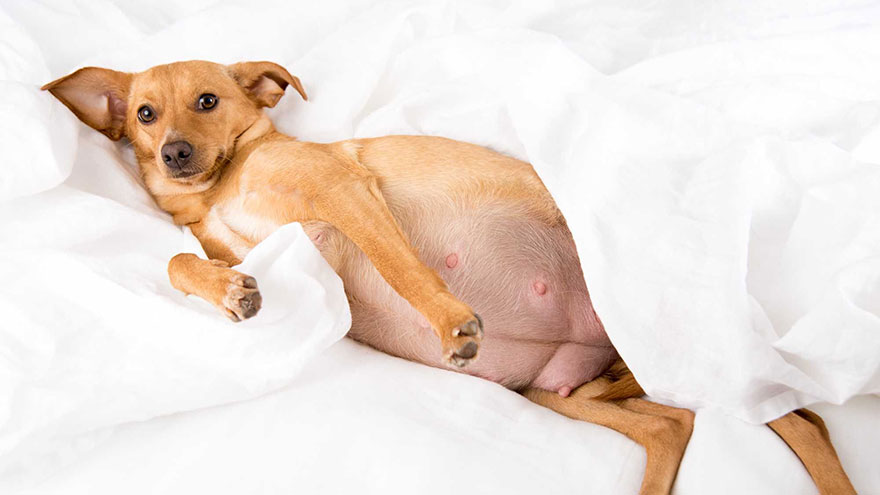 Unlike humans, pregnancy in dogs cannot be confirmed with a urine or blood test. Instead, veterinarians rely on feeling a dog’s abdomen 26 to 35 days after breeding for signs. However, this proves only 85 percent accurate. Owners may need to wait 45 days after breeding to see true confirmation on an X-ray. X-rays are 95 percent accurate in showing the number of unborn puppies.

A box, known as a whelping box, with sides approximately 6 to 8 inches high is ideal for dogs to give birth in. The height of the box hinders puppies from climbing out. Newspapers, which can be ripped up by pregnant dogs and you can change without difficulty, make suitable bedding. Towels or other linens will need to be laundered often. The whelping box should be placed in a comfortable, secluded part of the home.

The first stage of labor may go on for 24 hours. Dogs may be edgy, refuse to eat and choose to be by themselves. Dogs have contractions and give birth during the second stage of labor. After each pup is delivered there is a short time of rest; this is known as the third stage of labor. During any of these stages, dogs may want to relieve themselves outdoors; escort them outside in case they give birth there.

Within 24 hours of delivery, take dogs and puppies to a veterinarian. At home, monitor the new family but only interfere if problems occur; mothers instinctively know how to feed and care for their young. Feed mothers frequently and provide clean, fresh water for all. The temperature of the room needs to stay warm as low temperatures can cause puppy fatalities.