When the family dog begins to have eye problems, pet owners don’t usually consider cancer as a possible cause. However, when the veterinarian makes the diagnosis of ocular cancer, it becomes necessary for owners to educate themselves on this disease so they can make informed decisions. 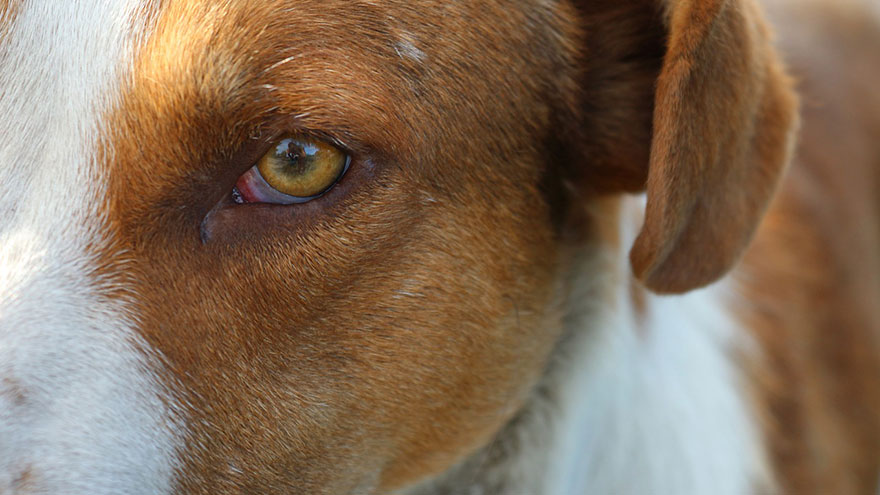 Several types of ocular neoplasias, or cancers, occur in dogs, including eyelid tumors, tumors of the mucosal parts of the eye, melanoma of the uvea, uveal lymphosarcoma, and carcinoma of the eye orbit. Usually a disease of older dogs, ocular cancer can be asymptomatic until the disease is well advanced.

Tumors of the eyelids and mucosal parts of the eye in dogs are commonly composed of sebaceous cells, the soft skin cells that secrete oils onto the skin. They can be either benign or malignant and are mostly found on geriatric dogs. These tumors often have a cobblestone appearance and may be associated with occlusion of the tear gland.

Canine uveal lymphosarcoma can be seen as a thickening of the iris with an attached non-pigmented nodule. It can progress to retinal hemorrhage, retinal swelling and/or retinal detachment. Often this disease presents as a symptom of other organ involvement. Carcinoma in the ball of the eye in dogs, while relatively slow growing, is usually malignant and a result of the spread of an adenocarcinoma from the nose. Symptoms may include protrusion of the third eyelid, bulging of the eyeball, and pain on opening the mouth. When there is optic nerve damage, the pupil of the eye becomes non-reactive

Most veterinary treatment of eye cancer in dogs will include some type of surgery. A tumor of the eyelid can be excised with skin grafts restoring the functional integrity of the part of the eyelid being removed.

Depending on the type and size of the tumor, its location and its involvement with other tissues or organs in the canine body, treatment may also include some form of cryosurgery–cryosurgery freezes and kills the diseased tissues. If possible, radiation therapy is an option. Veterinarians will often recommend surgical removal of the eye after the initial diagnosis of cancer.

Most veterinarians will recommend a series of tests, including a full physical examination, radiographs and blood work prior to starting treatment for canine eye cancer. These tests are used to determine the extent of the eye cancer, whether it has metastasized and whether there is any underlying causative disease.

Dogs with eye cancers rarely have a good prognosis. These cancers are usually a disease of older dogs, and even with aggressive surgical therapy, some can metastisize to other areas of the body.

Veterinarians will often prescribe medication to relieve some of the disease symptoms, but once the cancer reaches the central nervous system and the animal shows signs of neurological damage, euthanasia is often the only option.