One in four dogs dies of cancer, according to the website Vetinfo. The most common types of canine cancer are bone, skin and oral. Any breed at any age can get this often dreaded, debilitating and fatal disease, but early diagnosis and treatment can prevent the spread of cancerous growths.

Tangible growths are one of the most obvious signs of canine cancer. Other symptoms of cancer and cancerous growths, as outlined by Vetinfo, include discharge or bleeding; vomiting and diarrhea; open sores or infections that refuse to heal; difficulty moving, breathing or eating; loss of appetite and weight; infrequent or pained bowel movements; and lethargy or reluctance to play.

These symptoms can be signs of other diseases as well, so it is important to have your pet evaluated by a qualified veterinarian. 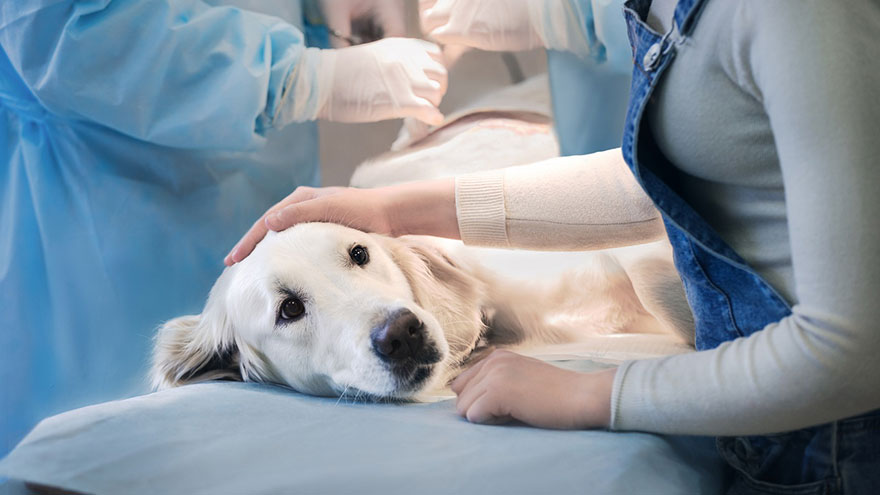 Canine cancer is often characterized by cancerous growths, which may be easily detected by a veterinarian upon physical examination, depending on the growth’s location. If one is found, a biopsy will likely be ordered, in which a small sample of the tissue is removed and tested for cancerous cells.

X-rays and ultrasounds can help identify and locate growths, even if they have not been perceived in a physical examination. CAT scans and MRIs serve a similar function but are more extensive. Blood samples also may be taken to test for certain chemicals, hormones and other factors indicative of cancerous growths.

Palladia is a fairly new drug and was expected to be widely distributed by 2010. It is the first canine cancer drug approved by the FDA. Palladia treats cancerous growths called mast cell tumors (MCT), which is the second most common type of canine cancer, and has been found to be successful in treating cancer past the first stage. Other conventional treatment options include surgery, radiation and chemotherapy.

Natural treatment options are also available and can be used in conjunction with conventional treatments to fight cancerous growths. Coenzyme Q10 has been found to be effective in protecting the heart and stimulating the immune system. Adding 1,000 mg of fish oil supplements per 20 pounds of dog every day is also recommended by Vetinfo, along with a canine cancer diet.

Special diets are often recommended for dogs with cancer, according to Vetinfo. These diets should eliminate any grain and offer plenty of omega-3, -6 and -9 fatty acids, which are essential in rebuilding tissue the cancerous growths may have overtaken or damaged. Vets recommend kibble diets be administered with lots of fresh water and at least some fresh food, 75 percent of which should be meat and 25 percent fruits and vegetables.

Foods with vitamin E, beta-carotene and selenium are recommended, along with raw bones, flax seeds, salmon and sardines. Fresh or raw supplements are recommended for the morning, while kibble should be given in the evening. Because ill dogs may have less appetite than normal, small meals throughout the day are also acceptable.

How to Treat Roundworms in Dogs

Lack of Appetite & Loss of Energy