What is Demodex Mange in Dogs?

Demodectic mange is a skin condition that is caused by a parasite called Demodex canis. Demodectic mange may be referred to demodicosis and red mange. If your dog develops demodectic mange, you will need to discuss treatment options with your veterinarian. Mange can cause serious problems for your dog if it is left untreated long term.

Demodectic mange develops when parasites make a home for themselves on your dog’s skin. It has long been thought that almost all dogs have the parasite that causes demodectic mange on their skin and living in their hair follicles. With that said, not all dogs show symptoms of mange because the immune systems in healthy dogs keep the parasite population under control.

Mange symptoms only develop when the parasite population becomes unusually high. This tends to happen if your dog’s immune system is compromised and unable to keep the parasites at bay. Human beings cannot develop demodectic mange.

Symptoms of Mange In Young Dogs

Demodectic mange is most likely to occur in juvenile canines. Young dogs who develop mange will often lose some or all of their fur on a relatively small area of skin. These patches tend to be located on the face but also may occur on the trunk of the body or on a limb.

The skin is typically not irritated or red and the condition will clear on its own without medication within a couple of months as the dog’s own immune system responds to the condition. 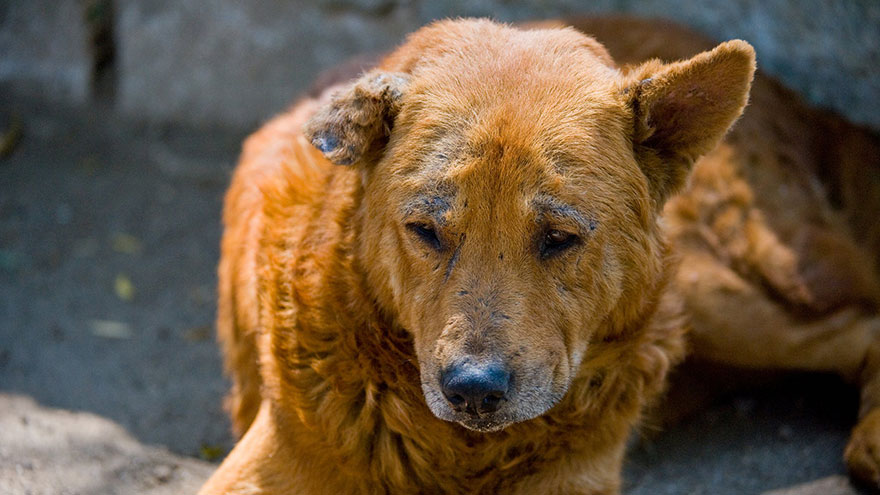 Symptoms of Mange in Adult Dogs

Adult dogs who develop demodectic mange tend to have red, irritated, scabby and itchy skin. They may show significant hair loss, starting on the face but also affecting other parts of the body. Dogs who are suffering from severe cases of mange may develop sores or infections as a result of excessive scratching and skin irritation.

The condition may accompany other signs of illness, as a number of dogs who develop mange as adults do so at times when their immune system has been compromised. In cases where an underlying condition is causing the mange, treating that condition may result in the mange clearing as well.

Mange can be treated by your veterinarian using skin ointments, medicated shampoos and specialized medicated dips. Antibiotics may need to be given if your dog has developed a secondary skin infection in addition to the mange. Some breeds of dogs are known to have chronic problems with mange.

These breeds include sheepdogs, Shar-Peis, Chihuahuas, bulldogs, dachshunds, boxers and American Staffordshire terriers. Animals who suffer from chronic demodectic mange should not be bred, as it is thought that the inability to keep the parasites in check is hereditary. This makes it likely that offspring also will suffer from mange.

Types of Worms in Dog Stool