Clostridium tetani bacteria are the culprit behind tetanus. They form spores that can grow in conditions with minimal oxygen, such as in soil. If a dog with a deep wound, such as a puncture wound from a bite, comes in contact with dirt contaminated by Clostridium tetani, he offers an ideal site for the spores to release the toxin responsible for tetanus, tetanospasmin. 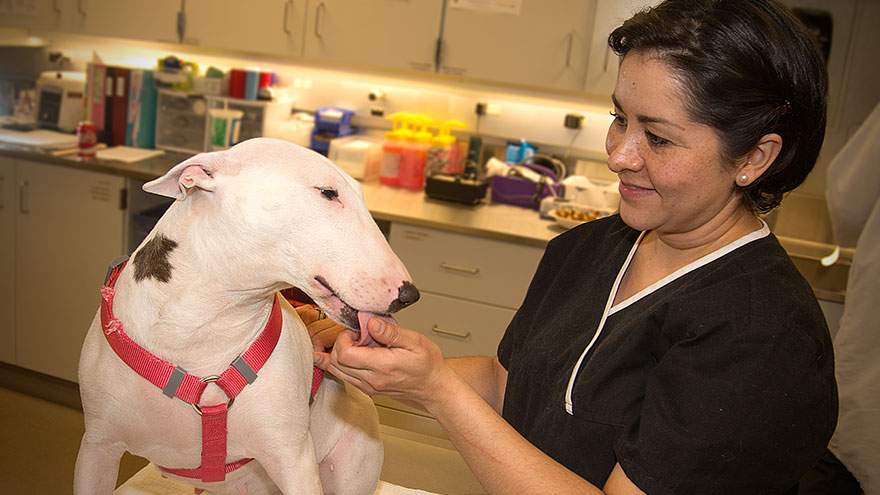 When the toxin releases into a dog’s body, it binds to his nerve cells and travels to his spinal cord, where it interrupts the release of the amino acid glycine, which controls muscle movement. When glycine function is impaired, a dog loses control of his muscle activity, resulting in spasms and rigidity.

The incubation period for tetanus generally averages 10 to 14 days. Tetanus can be localized, affecting the head or a limb, or generalized, impacting much of the body. Tetanus often begins in the localized form, sometimes progressing to generalized tetanus as the toxin spreads through the dog’s body. Stiffness is a classic symptom of tetanus.

When stiffness presents in the dog’s head, his ears, neck and jaw muscles become stiff. His forehead may look wrinkled, and his mouth may be open with his lips drawn back. It’s not unusual for a dog to have a difficult time eating when his head is affected. If one of his limbs is rigid, the diagonally opposite limb often becomes rigid as well, such as the front right leg and the rear left leg.

Whether it began as localized tetanus or as generalized tetanus, the signs of generalized tetanus are the same. The dog takes on a “sawhorse” appearance as his body and muscles grow increasingly stiff. His tail becomes rigid; eating, breathing and opening his mouth becomes difficult. Other symptoms include constipation, excessive drooling, fever and pain during urination. As the toxin progresses, he may experience muscle spasms in his whole body, paralysis and ultimately death as he’s unable to breathe.

A dog with tetanus requires veterinary treatment. Diagnosing the infection can be tough — often the initial wound has healed, and the vet will have to rely on symptoms to make a diagnosis. Antibiotics such as penicillin and metronidazole can kill the offending bacteria, and medications such as sedatives help minimize other symptoms. Depending on how sick the dog is, he’ll receive fluid therapy and potentially breathing and feeding tubes.

He’ll require hospitalization, and the vet will keep him in a quiet location, free of stimuli that can trigger spasms. Dogs being treated for tetanus usually improve in the first week, though it may take a month for full recovery.

Tip
There is a tetanus antitoxin, useful for treating other animals, such as horses, for tetanus. Its use in dogs and cats requires extreme caution because it can trigger a potentially dangerous anaphylactic reaction.

How to Cure Mycoplasma in Dogs

What Are the Symptoms of an Ill Aging Dog?