If your dog’s behavior changes when nighttime rolls around, it could result from physiological or psychological issues. The former include neurological problems, diabetes mellitus and renal issues, so it’s always important to take your dog to the veterinarian for diagnosis and treatment. Geriatric dogs might suffer from a form of canine dementia. If there’s a psychological reason for your dog’s night anxiety, a certified veterinary behaviorist might help. Keep a record of the particular pattern your dog exhibits to aid in determining the cause. 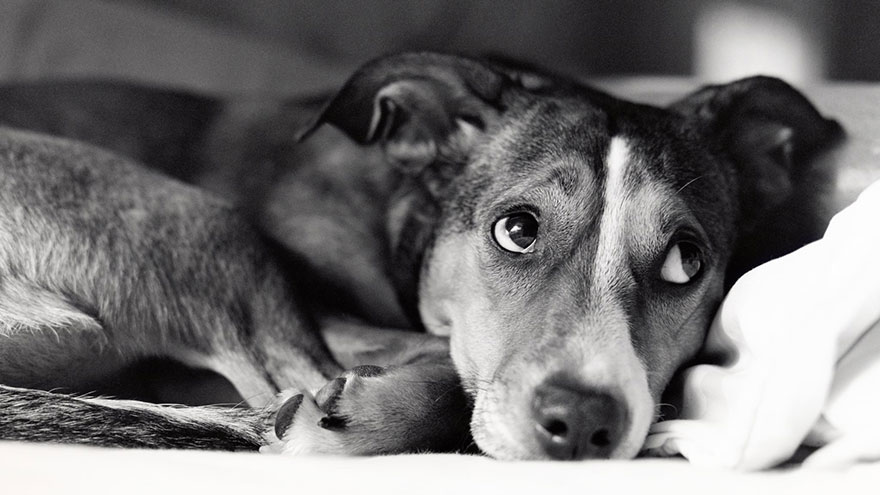 The old saying, “A tired dog is a good dog,” describes one treatment for night anxiety. Your dog could be telling you he’s just got too much energy to sleep, especially if he’s a canine who needs a lot of exercise and simply isn’t getting enough. Including more walking and running around time in his daily schedule could calm the night anxiety. If your dog also exhibits signs of separation anxiety when you leave the home, the night anxiety could be related behavior. A veterinary behaviorist can help you solve both issues. The ultimate goal is fostering your dog’s independence and allowing him to be comfortable being by himself.

Things That Go Boom in the Night

Loud nighttime noises, such as thunder or fireworks, can terrify some dogs. If you know these events trigger night anxiety in your pet, consider purchasing a special anxiety-relieving shirt designed for dogs. If the forecast calls for storms, put it on your dog before bedtime. You also might want to install a white noise machine in the place where the dog sleeps, or otherwise insulate his sleeping quarters.

Older canines can suffer from a dementia-like condition known as canine cognitive dysfunction. During the day, an affected dog may behave normally, or sleep excessively. When the rest of the household goes to sleep, he doesn’t. Instead, he might start pacing, vocalizing and appear disoriented. He might want constant attention, even if you’re asleep in bed. Take him to the vet for a thorough examination and diagnosis. There’s no cure for canine cognitive dysfunction, but different approaches can aid in getting your dog through the night.

Your vet might recommend melatonin, a hormone that can help regulate your dog’s sleep cycle. Slowly increase your older dog’s activity during the day, so he can’t sleep as much and is more tired at night.