Older large-breed and giant-breed dogs are susceptible to osteosarcoma, or bone cancer, which primarily targets the hind limbs and often requires amputation. Only about 5 percent of all canine cancers turn out to be osteosarcoma tumors of the leg, according to Doctors Foster and Smith PetEducation.com. 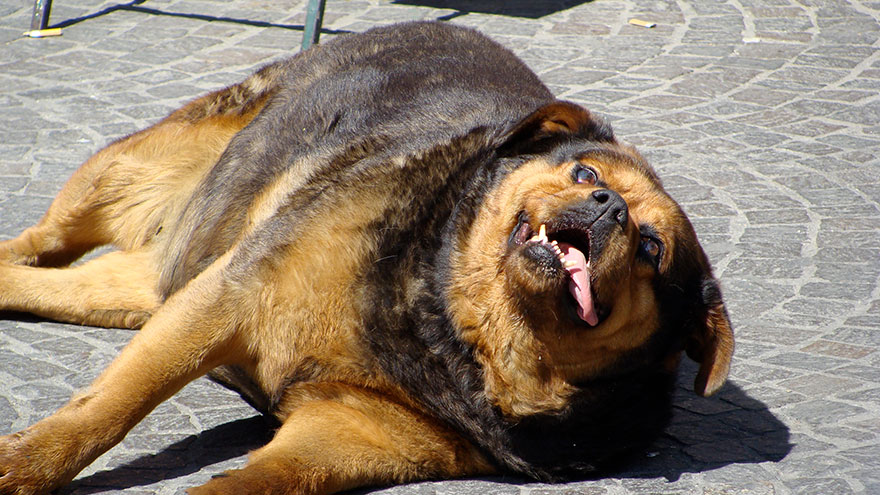 No one really knows why some dogs are afflicted with osteosarcoma. Yet, about 75 to 85 percent of osteosarcomas present in the canine leg, says Mar Vista Animal Medical Center of Los Angeles. A viable theory indicates a genetic predisposition for cell mutation at the site of the bones’ growth plates (at the ends of the bones), reports PetEducation.com. In addition, tumors can grow where significant trauma has occurred. Cellular activity increases at the locus of a bone break or bruise, which can then result in the growth of cancer cells.

Osteosarcomas are tender lesions that have the appearance of degenerating bone tissue. Symptomatology is synonymous with the location of the lesion itself. In other words, where the dog feels the pain is the location of the tumor. The dog may also present with a limp or lameness. Most osteosarcomas develop below the dog’s elbow or near the knee. The cancer tends to grow near the growth plates of the bone with obvious, on radiograph, inflammation of the bone tissue.

Metastasis to the Lungs

At the time of diagnosis, about 90 percent of osteosarcoma leg tumors will have metastasized, or spread, to the lungs. However, given the small size of the metastases early on, many of these will not show up on X-ray. As metastasis is usually certain, treatment of dogs with leg tumors assumes the cancer has spread to the lungs, no matter what the X-ray reveals.

Fast growing and able to spread with great ease, osteosarcoma must be treated very aggressively with a several-pronged protocol. After a veterinarian has positively identified an osteosarcoma leg tumor, the involved limb usually requires amputation. Limb-sparing surgery is only an option in exceptional cases, depending, of course, on the location of the tumor. Limb-sparing surgery is often not possible with hind limbs.

After removal of the limb, the veterinarian administers chemotherapy to the dog. Dogs who do not receive a drug regimen after amputation live roughly four to five months, reports Mar Vista. Veterinarians in the United States will tend to administer the anti-tumor drugs carboplatin and cisplatin. The protocol tends to be three chemotherapy treatments given intravenously one month apart.

Another chemotherapy agent, doxorubicin, is sometimes given in addition to carboplatin and cisplatin. Even with the administration of chemotherapy, the life expectancy of a dog with a swiftly identified and addressed leg tumor is roughly one year, reports PetEducation.com. However, a course of chemotherapy will make a dog nauseated and lethargic for only about a total of a week’s time, which will then give a dog a full year of life.

Causes of Hearing Loss in Dogs

How to Treat a Beagle’s Ear Infection