Kennel cough, also known as infectious tracheobronchitis, is a common disease among dogs. All breeds of dogs are equally prone to this disease, which is easily spread where groups of dogs gather — even at training class or the groomer’s salon — especially during the warmer months when social activities are more common.

Fortunately, kennel cough is easily treated in most cases, with the majority of dogs requiring minimal treatment. Isolation is part of managing kennel cough in groups of dogs and can aid in preventing other dogs from becoming infected. 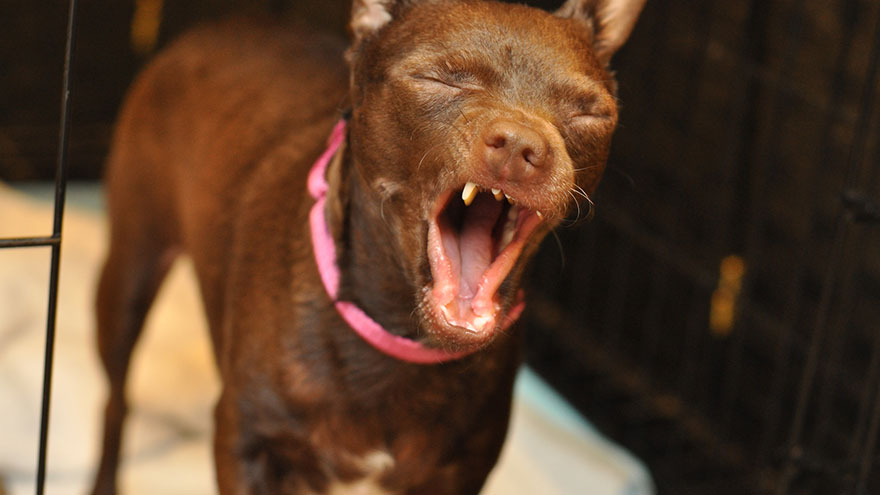 Kennel cough is a disease that shows signs of both viral and bacterial causal agents, which are spread when an infected dog coughs or sneezes. Stress, smoke, poor ventilation or even very cold temperatures can damage the respiratory system, creating a physical environment for the disease to form. Kennel cough is characterized by a short, harsh, rasping cough that might sound as if the dog is attempting to clear something lodged in his throat.

There are two forms of kennel cough. The first is a mild, self-limiting form that usually resolves in about 14 days, even without treatment. This more common form of the kennel cough is commonly treated with cough suppressants. The second form is more severe, with associated complications such as anorexia and pneumonia.

Tip
Not every cough is kennel cough. Kennel cough sounds may be confused with reverse sneezing, a condition that is common in toy dogs and dogs with weak tracheas. Call your vet for advice on your dog’s condition.

Affected dogs should be isolated as soon as they show symptoms of kennel cough. Isolation should occur for as long as the dog shows symptoms. Dogs become symptomatic between 3 and 10 days after exposure to kennel cough, so other dogs in the household may be showing symptoms prior to the end of isolation if they have been infected by exposure to the affected dog. Continue to isolate the affected dog as long as any question of possible spread of the disease remains.

A dog who has been infected with kennel cough should avoid contact with dogs outside the home for several months, to prevent the spread of the disease. If your dog must travel outside the house, prevent your dog from coming into close proximity with other dogs, remaining outside the range of droplet sprays from coughs or sneezes. Do not permit your dog to eat or drink from dishes in common areas.

Some dogs are more vulnerable to the severe form of kennel cough, including very young puppies, unvaccinated dogs, elderly dogs and dogs with other diseases or conditions that reduce the effectiveness of their immune systems. These dogs should be isolated immediately upon recognizing their symptoms and should remain isolated for up to six weeks. Vulnerable dogs need excellent supportive care, so pay particular attention to their eating and drinking habits while they are ill.

What Dog Diseases Can Be Passed to Humans?

Symptoms of Intestinal Cancer in Dogs