Dogs may suffer from intermittent bouts of diarrhea the same as humans. Diarrhea can range from “loose” stools to explosive episodes of diarrhea. If diarrhea persists it may be necessary to consult a veterinarian for a proper diagnosis and treatment plan. Never give your dog over-the-counter human medication for diarrhea, unless directed to do so by your veterinarian.

According to Pet Education, diarrhea is defined as the rapid movement of ingested material through the intestine. This results in loose stools, an increase in the frequency of bowel movements and an increase in the amount of stools that a dog passes. Diarrhea is considered to be intermittent if the symptoms appear, then disappear and return only a few weeks later.

In order to determine the cause of intermittent diarrhea in dogs, veterinarians classify symptoms according to the small intestine and large intestine. Symptoms such as vomiting, increased gas and bloating, weight loss and an increase in the volume of stool may be caused by a disorder of the small intestine. Large intestine disorders often cause an increase in the frequency of bowel movements, straining to defecate and a large of amount of mucus in the stool. 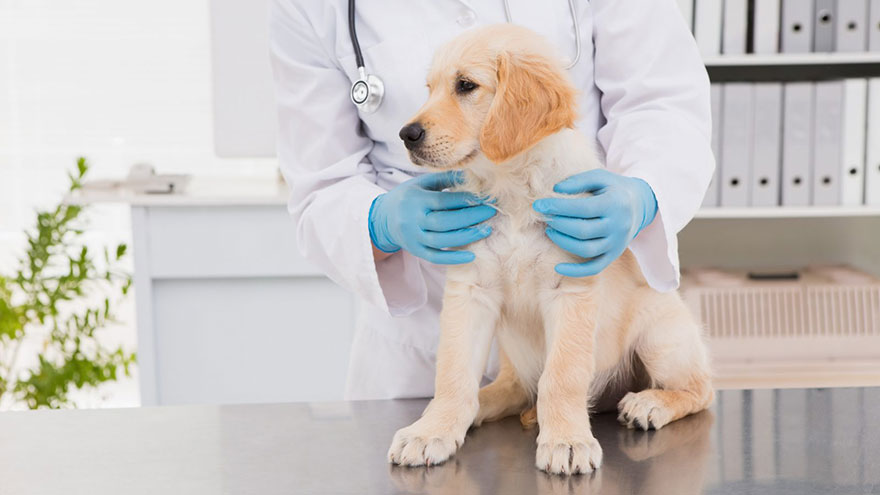 The causes of diarrhea in dogs may include a change in the dog’s diet, food intolerance, parasites such as roundworms or whipworms and ingestion of toxins such as lead, zinc or arsenic. Certain viral infections such as parvovirus, distemper and coronavirus may also cause intermittent diarrhea in dogs. Although rare, intermittent diarrhea that presents with vomiting may be caused by a life-threatening intestinal obstruction. Dogs that suffer from this condition may need surgery to remove the obstruction.

The treatment for intermittent diarrhea depends on the cause of the condition. According to Vet Info, adding fiber to the dog’s diet for a few days may help firm up the stool, as will switching to a bland diet (such as boiled hamburger and rice) for a time.

The vet may prescribe antibiotics for dogs that have diarrhea as a result of a bacterial infection to avoid more serious illness (septicemia). Dogs can experience dehydration from diarrhea and in these cases, it may be necessary to give IV fluids for a few days instead of oral fluids.

What Is Entropion in Dogs?

Why Does a Puppy’s Breath Smell So Bad?